Loreto wheelchair accessible tours is located on the top of a hill among the green hills of the Marche region.

This place, between faith and history, will know how to open your heart and soul.

Loreto has been a destination for pilgrims for years, because it houses one of the most important treasures of Christianity.

The Holy House of Mary of Nazareth.

But don’t be fooled by this, because, whether you are a believer or not, and even if religious tourism is not your passion, Loreto is still worth a visit.

The city is in fact surrounded by walls erected starting as early as the XIV century as a defense.

Especially from Turkish raids in the Adriatic, and rebuilt in a hurry, between 1518 and 1522 after the assault on Porto Recanati.

On the South side is the Porta Romana, built starting from an idea by the architect Pompeo Floriani around 1590 and decorated with two statues of prophets sculpted by Simone Cioli in 1538-41.

The Porta Romana leads to Piazza Leopardi, or Piazza dei Galli, whose architectural appearance is in the XVIII century style.

On one side of the square you can admire the Portico delle Transenne erected in the second half of the XVII century.

The surroundings of Loreto offer a considerable amount of ideas for visits, that allow you to discover one of the most evocative and touristically relevant corners of the Marche.

Important is the Conero Riviera in which the homonymous nature reserve is inserted, enriched by the pretty villages of Numana and Sirolo.

The best known and most representative monument of Loreto is certainly the Basilica of the Holy House, built around the Sanctuary.

The Basilica of Loreto is one of the main places of Marian worship and one of the most important Gothic-Renaissance monuments in Italy on which the greatest architects of the time worked.

It is located in Piazza della Madonna in front of the Fontana Maggiore.

The facade of the basilica is entirely in Istrian Stone designed, perhaps, by Donato Bramante.

On the left of the facade stands the XVIII century bell tower signed by Luigi Vanvitelli.

According to ancient tradition, the Sanctuary of Loreto preserves ( under the Dome ) the remains of the House of the Mary of Nazareth, where the Virgin received the Annunciation.

A small building made up of three walls entirely of terracotta bricks, with no ceiling and foundations.

She would have been transported by the angels in the night between 9th and 10th December 1294 and was left on a hill covered with laurels to escape the wars of Palestine.

More recent research has verified the originality of the bricks of the Holy House of Nazareth.

The historical hypothesis that it was transported by the Angeli Family aboard a ship to the Loreto hill has been confirmed.

Furthermore, the dimensions of the house coincide with those of the hole left in Nazareth. 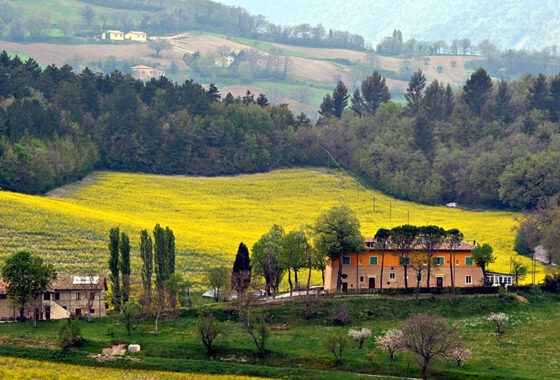