For a country which is only a 2 1/2 hour direct flight away,it is truly a shame not to see italy and all it has to offer! I found Accessible Italian Holiday on the net, who offer wheelchair accessible tours of Italy.

I only stumbled upon his site, I think from a link from another happy reviewer and we started planning this trip s six months ago, and if I had any doubts or fears, he would phone me, which went way above the call of duty, and let me know that I was dealing with a genuine professional person, whose aim, from the outset was for me to have an unfogettable italian holiday, and to go home and spread the word.

You get what you pay for, and I had spent a lot for a wheelchair accessible van and driver but ultimately the best way to see the real italy.

The countryside is like something out of a storybook, with sweeping valleys and crowded mountains, usually topped with a fantastic old church.

On the day went to Naples & Sorrento and Pompeii from our base in San Felice Circeo it was apparently a 600 km round trip, so the money was well spent.

Accessible Italian Holiday does offer excellent value for money, and after being burned by the greedy indians last year, it was refreshing to see someone operate out of purer motives other than tip pursuit!

Air Lingus are great. I expected no problems, other than the fact that I had to be in the airport by 04:30am.

The reason I like Air Lingus, is because they are not inflexible.

With some airlines if your ticket says 6B, you are going there, even if it means people have to climb over you.

Not so with Air Lingus, and even on the way back, because the plane was not full, they reshuffled seats, so that I could have a free seat beside me, if I needed a snooze I was lucky to have the window seats ( both times ) and it was great flying over the Swiss alps.

Plus I was beside nice people, and had none of the toilet concerns associated with long haul flights.

I arrived in the land of beautiful people at 11am, which meant I had the full day more or less.

For schedule reasons, we had to drive two hours south of Rome to San Felice Circeo first, a fabulous seaside town, a popular weekend retreat for romans.

I am more comfortable getting my bargains at market stalls.

May is a perfect time to visit italy.

I was surprised at how luscious and green the countryside was.

Vincenzo said its a different story in July or August, with the breath taking vistas being sun scorched.

The Hotel LSF1, was a former religious run orphanage, which offered stunning views and a large room ( I don't think I ever slept as soundly as that first night ).

There is not much in the town, but the old town is majestic.

Apparently taxi's are a rip off, and wheelchair cabs practically non existent.

What a shame it would be to go all that way, and not see the stunning sites because their off up a hill.

But that's italy for you, and for a wheelchair user without proper planning, I'm sure could easily be a nightmare.

Of course, I took the easy route, just paid and left the hard part to Vincenzo. The first full day in Italy we spent traveling to the stunning Abbey of Montecassino, which has to be seen to be believed.

It is a Benedictine Abbey perched way up atop a mountain. We zigzagged our way up these corkscrew roads but the views from the top were well worth it.

The Abbey of Montecassino itself could easily have ranked as one of the wonders of the world, and apparently gained notoriety during World War 2 when it was occupied by the Germans.

It would have been extremely difficult for the monks to walk all the way up to the abbey from the towns below in the time before cars, and maybe that's why they created such an idyllic retreat, especially as they are an enclosed order.

From there we went on to the historic town of Gaeta with its ancient fortress overlooking the town.

t was here that I got a phone call from Milan, Gian Piero was checking to see if I was OK.

He had contacted me through my website a couple of months ago , and is heavily involved in FA_babelFAmily, a multilingual mailing list dedicated to Friederich's Ataxia.

His dedication is amazing, and I really appreciated the phone call. It was here also that i got my first pair of cheap sunglasses, and yet another visit to get the famous italian gelati.

I dont know why Italians put whipped cream on their ice cream. For me this was too much. You certainly are in carbohydrate country.

For breakfast I would have so many pastries with chocolate inside, that they soon ran out of them in San Felice Circeo.

Looking around the town of Gaeta you could always feel the presence of the ancient Romans.

History is everywhere, almost around every corner there was something spectacular to witness.

That afternoon the skies were actually a bit grey, but on the whole I was extremely lucky with the weather.

Back to the Hotel LSF1, and because on my reliance on the attendant, I would be in bed by half nine, not that there was much to see outside.

It is always hard on the first day to be discussing personal issues with a complete stranger, especially one that has little or no English.

The assistant Vincenzo and I met earlier in the day, to discuss my needs and wants, with Vincenzo's translating help.

It is always better to have a male assistant. Perhaps in the future I need to bring one of my own, but it all boils down to money, and this was by far the cheaper option, to have an assistant in the morning and evening and Vincenzo's help during the day.

The next day our ultimate destination was Sorrento and Pompeii, passing through Naples on the way.

I really don't have enough words to describe Sorrento. It was just like you would picture a millionaires playground to be like. We got off at one of the little streets close to the beach, but I lived up to my reputation, by heading right for the shops.

I bought a leather bag and shoes, and came across one great shop that makes soaps etc from lemons.

I know Sorrento is also famous for its inlaid wood. As nice as they were, they were a bit touristy and expensive.

Pompeii was also amazing. I think we were the last visitors allowed in. Even the market stallers were packing up.

I had no idea that Pompeii was actually a huge sophisticated city. Vincenzo said that when he was young he came with his family, and he was so exhaused because they literally spent the whole day walking around.

For a wheelchair user, there are only a few places you can get around with assistance, but for me this was enough.

In these situations, I gave the video camera to his driver and he could walk around taking video , for later inspection.

But to be honest it all looks more or less the same after a while.

The next day, Tuesday was a quiet affair. After 3 days of hard going i looked forward to a much needed rest.

We just went to the Village market where I got some great cheap things, like towels, a bag, and underwear.

The beach in San Felice Circeo now was practically deserted, but the sea air was so fresh.

We just lazed around, had a meal, and tried to get our energy levels up for our trip to Rome the next day.

Before Rome the next day, we stopped off at a farm, close to us , which sells natural honey. I did take 6 or 7 jars which in retrospect was'nt the smartest thing to do, as it weighed down my luggage.

I had most of my shopping done before Rome. On the way up we called in at the church of Priverno Fossanova of St Thomas Acquinas, where he lived and died.

After all the effort to get out and go down to the doors, the notice on it said it would not be open till 3.

So the question for me was whether I wanted to wait 40 minutes, after a while all churches look the same , and I didn't regret my decision on my way to Rome!

Thursday was indeed my favourite day, and the city definitely lived up to its reputation.

We did all the usually touristy things, the Colosseum, the Trevi Fountain, the Spanish Steps, Venice Square etc.

Vincenzo is from Rome, so it was great having his expertise, showing me around his own city.

He said that when they were young, himself and his friends would play hide and seek at the Colosseum.

You are almost afraid to close your eyes, as around every corner there is something more amazing than the next.

It is like one vast open museum. Friday was reserved for the Vatican and the museums.

The queue's were enormous, but to be honest, we were ushered to the front, and given free tickets.

The place is accessible through a series of special elevators. We saw a small selection of rooms, the archive rooms, ( with various gifts to the popes down through the centuries and letters from people like Michaelangelo and Abraham Lincoln ) the Sistine Chapel, St Peters Bascillica and Square and the Papal crypt.

I know it is an art lovers dream world ( apparently there were over 6 million visitors last year), but I found the whole place completely over the top and decadent in the extreme.

We spent the rest of the day eating ice cream and just people watching.

They were making a film commercial in the square, and I had a luggage bag to buy. It was a pity that I never got to see Rome in all its night time splendour, but I suppose that's what return visits are for.

For me a week was enough, I had pushed myself and was looking forward to my own bed.

I would strongly recommend Vincenzo, and his great company to anyone, it is a custom made holiday which will leave you wanting more! 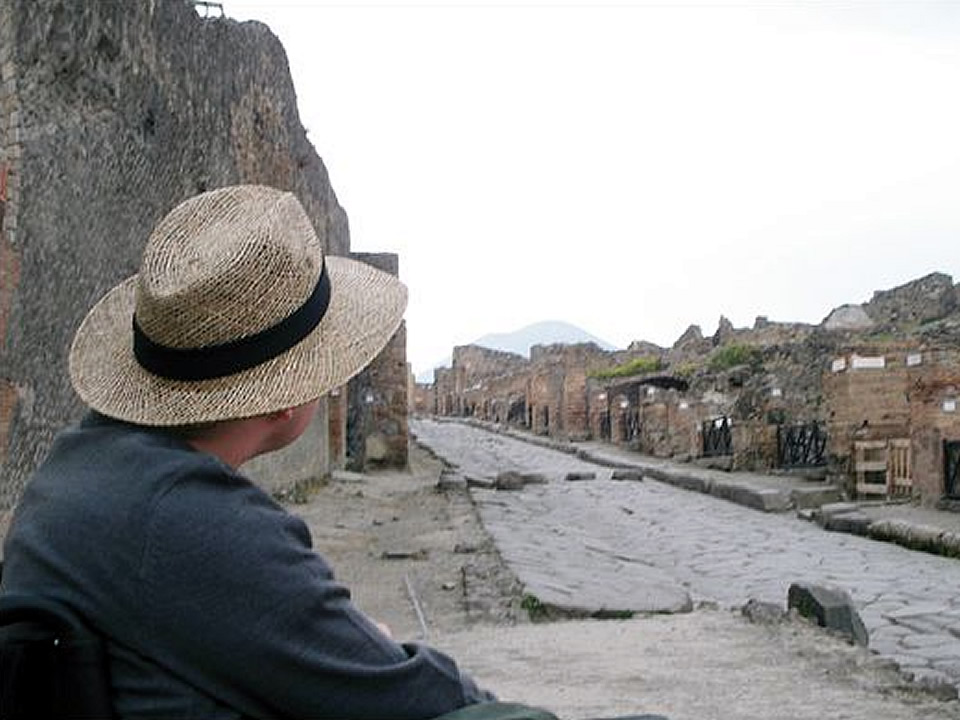 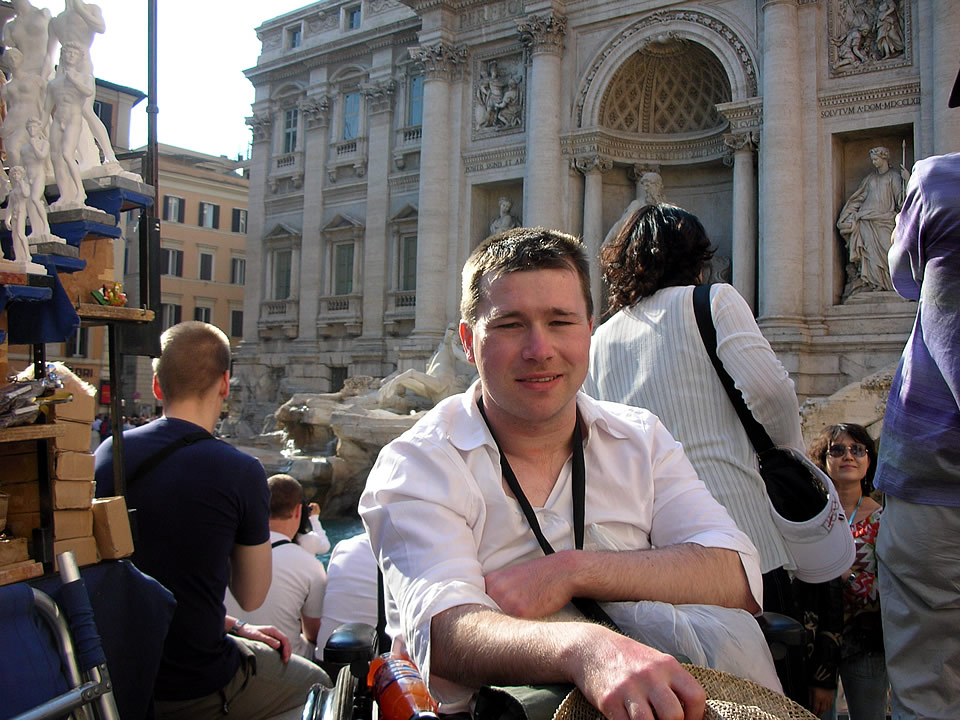 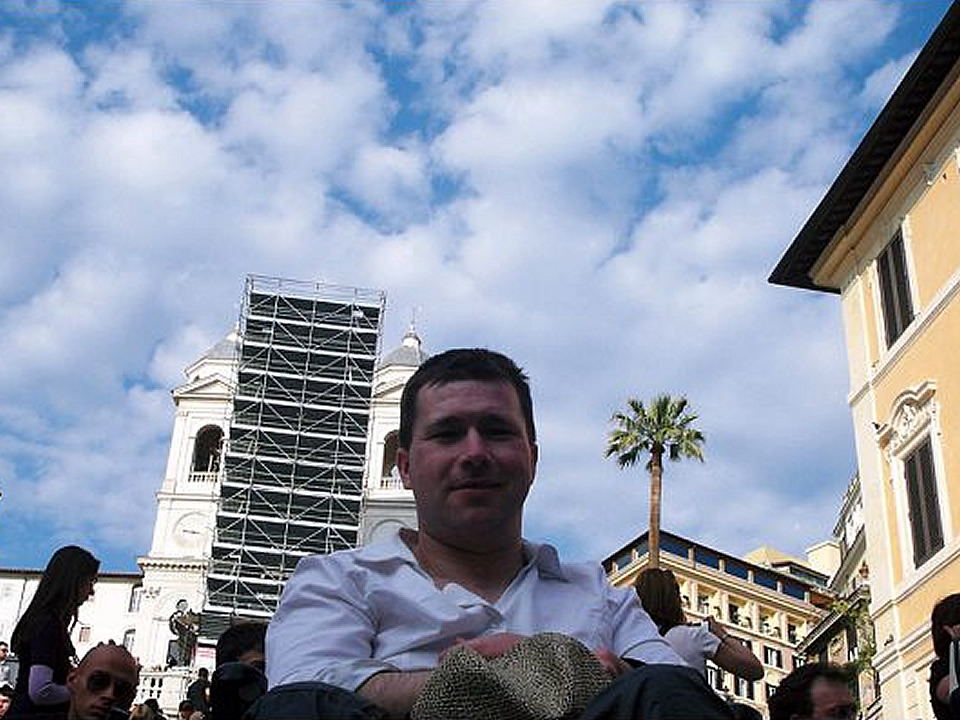