The whole family is anxious to let you know what a fantastic time we had last week.

It could not have been any better.

You and your driver were a great help to us from the moment we arrived at the Rome Fiumicino  Airport.

Having you waiting there to help us juggle the two wheelchairs, our cases and hand luggage was great.

Unfortunately we were so tired from the early flight that we all slept most of the way to the Hotel LSF1, so did not have the opportunity to appreciate the scenery very well.

Once at the hotel we were feeling refreshed and ready to explore a little. The Hotel LSF1 rooms in San Felice Circeo were ideal for us as they were all well furnished, airy and clean with ceiling fans to keep them cool.

As one of the rooms was to house two of our daughters and their Manual Wheelchairs and also the hired Wheel In Shower we were pleasantly surprised by the amount of space they still had to manouevre in.

The grounds of the Hotel LSF1, it's restaurant and bar were all accessible.

We found the staff were really geared up to help in any way they could; from giving us the table nearest to the restaurant door and removing two chairs so that we could just glide the wheelchairs into place to making slight changes to the menu for our two vegetarians daughters.

We knew that we had booked for the two tours which were Naples & Sorrento Accessible Tours and Rome Accessible Tours but were really surprised when we had our chat later on our first day and found that we would have the minibus and driver available to take us on some other short trips in the surrounding area on the other days of our holiday.

It was so good that you gave us suggestions of what we could do and left it up to us to make all of the decisions so we always felt in control of our holiday. As you know the itinerary for the week worked out as:

Saturday - Settle into our rooms, get our bearings and have a walk to find our way to the beach. ( Relaxing after the early flight )

Sunday - Spend time on the beach, swim in the sea have a walk along the promenade. ( Beach and kiosk were totally accessible as were the toilets. Staff were helpful. Sea was calm and warm so Charlotte swam in the sea for the first time ever. We all caught the sun )

Monday - Very early start but breakfast still provided by the hotel. Drive through Naples to Sorrento for lunch and shopping.

On to Pompeii ruins. ( Very scenic drive and Vesuvius impressive. Naples was hectic but impressive.

Enjoyed shopping in Sorrento and it was made much easier by you and your driver pushing the wheelchairs for us.

Cloisters of the church were so peaceful. A lovely town. Pompeii almost deserted as it was late afternoon and it was cooling down a little too. Impressed by the size of the ruins and the quality of the frescoes.

Tuesday - Spent the morning traveling to the Abbey at Fossanova which was famous for its association with St Thomas Aquinas. ( Abbey was elegant and tranquil, and the staff attentive. Abbey shop had some nice inexpensive gifts. The ceramics and jewellery shops outside were good but were outdone by the delicious smell from the biscuit bakery. Mmmm! )

Wednesday - Stayed local to the beach and then had a meal up in the Old Town of San Felice Circeo. ( The view was magnificent and it was really so amazing to walk around the picturesque streets in the evening with all the locals, from babies to grannies, and feel part of it all. It's something we can't really do at home. The food was excellent and a wonderful time was had by all. )

Thursday - The day we had been looking forward to most, Rome. The drive there was not as horrendous as we thought it might be at that time in the morning so we arrived fairly refreshed.

It was great to have your guidance to smooth our way into the Vatican Museums. As you said when you left us at the beginning of the visit there, the staff all spoke English and automatically whisked us through to the most accessible routes.

The cafe where we met you opposite the exit of the museum was excellent.

Our visit to St Peter's Church was also awe-inspiring and it was quite a thrill to be taken through some parts that are not usually open to the public because the usual disabled lift was out of order.

We even had to stop and wait while a stream of limousines belonging to the Iraqi Prime Minister and his retinue drove past us, and as you know we were impressed by our meeting with members of the Swiss Guard.

The Roman Forum and Colosseum were much more huge and impressive than we had imagined. ( An amazing day with so much to try and take in. Words cannot suitably describe the wonders we saw in the Vatican libraries and especially the Sistine Chapel.)

Friday - A last swim in the sea, relaxing on the beach and lunch in the hotel. Minibus to Terracina for an evening of browsing the shops, eating ice cream and joining the rest of the population taking the air in this pretty town.

Satuday - Up with the lark to fly back home. Your help at the airport made everything so much easier.

September 2007 until July 2008 had been a time of big changes to all five of our family because of uncertainty with jobs, moving away from home and starting new careers so we decided that we deserved a holiday that was a bit special.

All we can say is the flexibilty of the holiday and the control we had over our schedule along with all of the help that you and your driver gave us made our holiday the one that we have agreed was the best ever, so it has exceeded all our expectations.

Both of you have been kind, helpful, entertaining and extremely friendly so we feel as if we have known you for years.

Everyone here is determined to start saving their money for a return trip with you as soon as possible.

You will be receiving a letter from Charlotte and a drawing from Laura in the post shortly as they wanted to say their own 'thank yous.'

Take care of yourselves, The Brooks Family, Dudley, West Midlands. 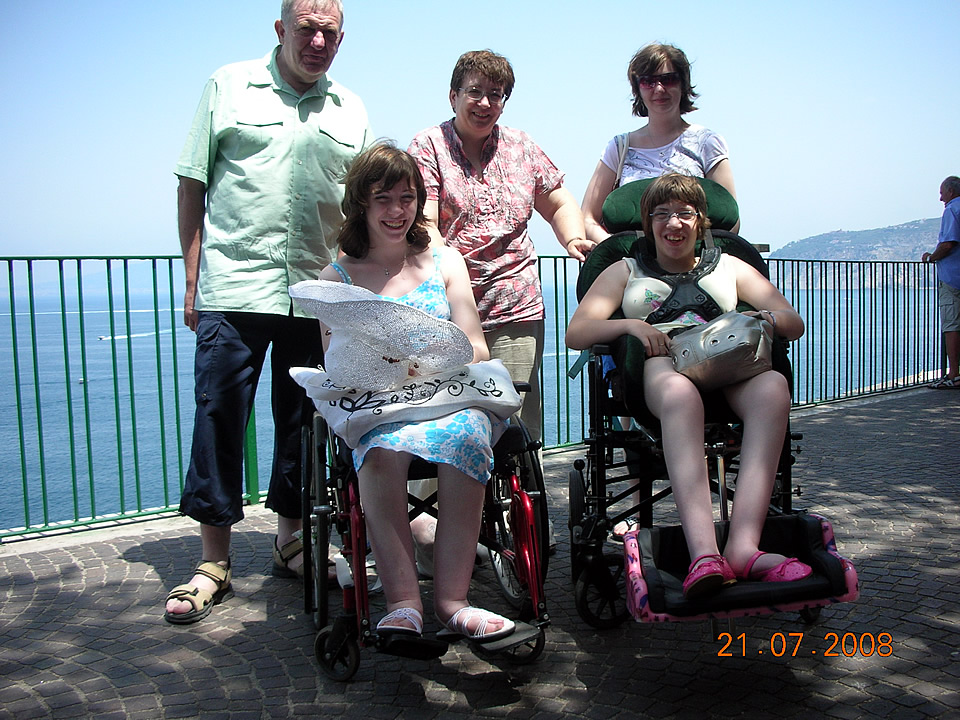